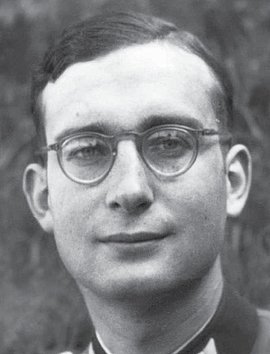 Ludwig von Hammerstein-Equord was the fifth of seven children of the general and later Hitler opponent Kurt von Hammerstein. Having completed his schooling at the Mommsen Grammar School in 1938, he worked in mining. In 1940 he became a private in an infantry regiment that was briefly deployed in France and then posted to East Prussia. Following an injury, he began studying mining science. As an aide-de-camp, he was in close contact with the conspirators of July 20, 1944, and was one of several officers who declared themselves willing to arrest SS men and military officers who proved to be Hitler supporters. On July 20, 1944, he waited from midday on at Berlin’s Hotel Esplanade, along with Ewald Heinrich von Kleist, Hans Karl Fritzsche, and Georg Sigismund von Oppen. They were ordered by telephone to the Bendler Block at around 4:30 pm, to support the coup then underway. Hammerstein was involved in arresting General Joachim von Kortzfleisch, the commander of military district III (Berlin), who refused to cooperate with the conspirators. After the coup failed, Ludwig von Hammerstein managed to escape from Bendlerstraße and went into hiding until the end of the war.