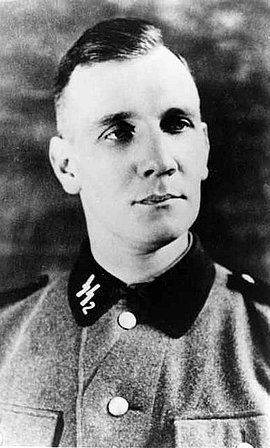 Kurt Gerstein was born in Münster and grew up in a judge’s family. After gaining his school-leaving certificate he worked in the Christian youth service, where he rapidly earnt recognition and influence. He studied mining and gained his engineer’s diploma in 1931. In May 1933 Gerstein joined the Nazi Party (NSDAP). In the same year he openly protested against the dissolution of the Protestant youth federations, and became active in the Confessional Church soon after. In 1936 he was expelled from the NSDAP and imprisoned twice. After Gerstein learned of the murder of patients in psychiatric clinics and homes, he decided to join the Waffen-SS (Combat SS) to get access to more information. He was allocated to the Waffen-SS sanitary department and became director of the technical disinfection service. In June 1942 Gerstein was assigned for the first time to obtain hydrogen cyanide (Zyklon B) for murdering human beings. In August 1942 he witnessed the mass murders in the extermination camps Belzec and Treblinka. Gerstein informed foreign diplomats and clergymen about the National Socialist crimes of violence on several occasions. On April 22, 1945 he gave himself up to the French authorities. In July 1945 proceedings were initiated against him for murder and for aiding and abetting murder. Kurt Gerstein perished in a prison in Paris on July 25, 1945 in circumstances that remain unexplained to this day. The “Gerstein Report” he wrote in prison is one of the most important eyewitness accounts of the implementation of the mass murder of the European Jews.