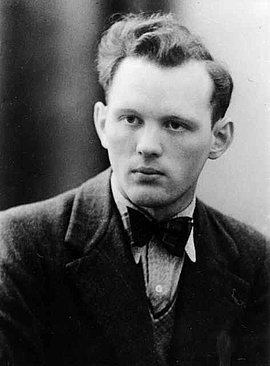 After 1933, the driver Johannes Harms’ family had to put up with repeated Gestapo searches of their home, as he was a Jehovah’s Witness and thus an opponent of the National Socialist ideology. When he was called up to join the Wehrmacht, Harms described himself as “unworthy for service” and ignored the order to report to the army. He was arrested in early September 1940, and sentenced to death by the Reich Court Martial in Berlin on November 7, 1940. Johannes Harms was murdered in Brandenburg-Görden on January 8, 1941.

Shortly before his death, he wrote to his father:

“The death sentence has already been passed, I’m lying chained up all day and night – the marks (on the letter) come from the handcuffs – but I have not yet stood up to the utmost. They don’t make it all that easy for Jehovah’s Witnesses to stand tall. I too am always given the opportunity to save my earthly life and lose my real life. Even in sight of the scaffold, Jehovah’s Witnesses are given another chance to break their oath. So the battle goes on for me, and I too have many victories to win, so as to be able to say: I have fought the battle, I have kept up my belief, from now on I am worthy of the crown of justice, which God the just will give."