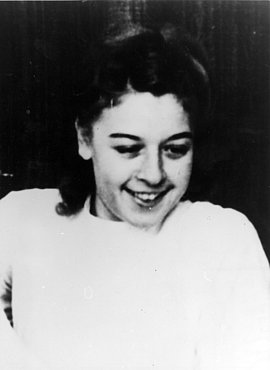 Born in Berlin in 1916, Hildegard Jadamowitz trained as a medical technical assistant through self-study. She joined the Communist Youth Federation (KJVD) as early as 1931 and was briefly arrested in 1936, but acquitted for lack of evidence. Hildegard Jadamowitz made contact to a communist resistance group around Hans-Georg Vötter in Berlin-Britz, where she met her later fiancé Werner Steinbrink. Through Steinbrink, she joined the group around Herbert Baum, forging important links to other oppositional circles. Hildegard Jadamowitz and Werner Steinbrink wrote a leaflet sent specifically to doctors in Berlin, pointing out the catastrophic development of medical care. However, they not only wanted to appeal to the doctors’ sense of responsibility, but also to show that they had to work with many different groups. This went back to earlier efforts to form a joint antifascist defense front, and there were similar attempts in other communist resistance groups. Hildegard Jadamowitz took part in the arson attack on the propaganda exhibition “The Soviet Paradise” in Berlin’s Lustgarten on May 18, 1942, which was prepared by Herbert Baum and Werner Steinbrink and carried out by members of the resistance circles around Herbert Baum. She was arrested a few days later, sentenced to death on July 16, 1942, and murdered in Berlin-Plötzensee on August 18, 1942.