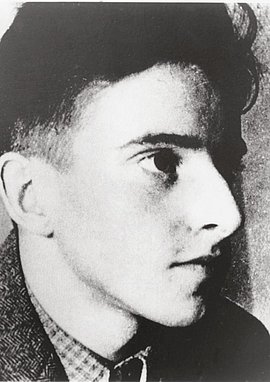 Born in Hamburg in 1919, Heinz Kucharski attended the Lichtwark School and went on to study philology, ethnology, and Oriental studies in Hamburg. He organized literary evenings at which political texts were discussed. Kucharski and Margaretha Rothe distributed flyers giving details of the times when the German Freedom Station could be received. At the end of 1942 he discussed the White Rose's third leaflet with Margaretha Rothe; Hannelore Willbrandt, a bookseller; Albert Suhr, a doctor; and Reinhold Meyer, a philosophy student. The Gestapo arrested Heinz Kucharski, his mother Hildegard Heinrichs, and his girlfriend Margaretha Rothe on November 9, 1943. After the "People's Court" death sentence of April 17, 1945, Kucharski managed to escape while being transported to Bützow-Dreibergen, the prison where he was to be executed. Reinhold Meyer, who was also arrested, fell seriously ill in custody and died in Fuhlsbüttel Gestapo prison on November 12, 1944. Margaretha Rothe was initially taken from Fuhlsbüttel to Cottbus, then later to Leipzig- Kleinmeusdorf prison. She died in hospital in Leipzig on April 15, 1945, just before the city was liberated by American troops.