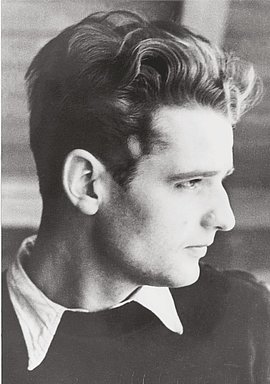 Born in Ingersheim/Württemberg in 1918, Hans Scholl grew up in a liberal Protestant family with four brothers and sisters, and was strongly influenced by the "Bündische Jugend" youth movement. From 1933 on, Hans Scholl was active in the Hitler Youth, climbing to the rank of "Fähnleinführer." However, he soon turned his back on National Socialism and set up a group in Ulm in early 1936, based on the lifestyle and goals of the banned "German Youth Group for Boys of November 1, 1929" (dj.1.11). The Gestapo imprisoned him for two weeks at the end of 1937. After his labor and military service, Hans Scholl started studying medicine in Munich in the summer semester of 1939. In May 1940 he was deployed as a medical orderly on the French front. Hans Scholl was able to continue his degree in April 1941 in the 2nd Student Company of the Army Medical Squadron in Munich, where he met Alexander Schmorell in June 1941. From the fall of 1941, Hans Scholl was in close contact to the Catholic journalist Carl Muth. In June and July of 1942, Hans Scholl and Alexander Schmorell distributed the first four White Rose leaflets. Along with Schmorell and Willi Graf, Hans Scholl was sent to the Soviet Union from the end of July to the end of October 1942 on a "front internship." After their return to the University of Munich he continued his resistance activities. The group’s fifth leaflet was duplicated and distributed by Hans Scholl, his sister Sophie, Alexander Schmorell, and Willi Graf. In February 1943, Scholl and Alexander Schmorell painted slogans such as "Freedom" and "Down with Hitler" on Munich walls, with the support of Willi Graf. Hans and Sophie Scholl placed the sixth and final White Rose leaflet around the Munich University building on February 18, 1943, throwing some down into the atrium. They were arrested at the university, sentenced to death four days later and murdered in Munich-Stadelheim Prison that same day.