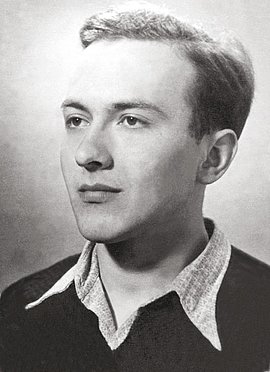 From Easter 1928 on Hanno Günther attended Berlin’s best-known school based on Reform ideas, the Rütli School in Neukölln. He was a member of the Young Pioneers and the Communist Boy Scouts. From 1934 on he lived at Scharfenberg School Farm on an island in the Tegeler See, but was forced to leave a year later for political reasons. During his apprenticeship as a baker he met Elisabeth Pungs, a communist supporter. After the German victory over France, Günther, Elisabeth Pungs and Wolfgang Pander, a Young Communist of Jewish origin, produced a series of leaflets, Das freie Wort (“The Free Word”), signed in the name of the Deutsche Friedensfront (“German Peace Front”). Written partly in rhyme, the leaflets communicated news about the war situation, called for peace and freedom of opinion and called on armaments workers to engage in sabotage. Later, Günther and Bernhard Sikorski, Emmerich Schaper and other former Rütli School pupils formed a small resistance circle. Its members held regular meetings where they read Marxist writings. The group also established contact with Herbert Bochow, a former Communist Party functionary. Hanno Günther was arrested by the Gestapo on July 28, 1941. On October 9, 1942 the People’s Court sentenced him to death with six of his friends. He was murdered on December 3, 1942 in Berlin-Plötzensee. In her diary Elisabeth Pungs described Hanno Günther’s attitude before the People’s Court, “I can see Hanno in front of me, pale but emotionally balanced, running his finger between his throat and collar; he was probably trying to tell me that he expected the death sentence. Where did this young man’s composure come from? He hadn’t even started living yet.”