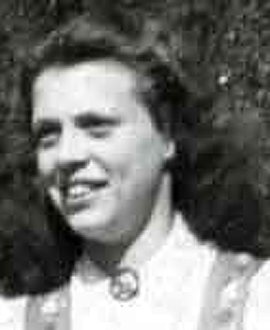 Gertrud “Mucki” Koch was born in Cologne, the daughter of a boilermaker and an apothecary. Her father was a communist, frequently arrested after 1933 and murdered in a concentration camp in 1942. The family suffered a great deal of repression. Gertrud’s mother lost her job and the two of them had to leave their home. Money was tight and Gertrud had to earn money even as a child. Her mother could not afford to send her to high school, so she took an apprenticeship in a Montessori kindergarten. She was not allowed to take her final examinations, however, as her family was regarded as “politically unreliable.” Gertrud Koch was a member of the communist Red Young Pioneers before the National Socialists took power, and refused to join the League of German Girls after 1933. She and friends from Cologne and Düsseldorf formed a group for hiking and playing music, which became increasingly politically active. The group began to produce and distribute flyers. Their most spectacular act was to scatter flyers from the dome of Cologne’s main station. A number of arrests followed. In December 1942, Gertrud Koch was taken to Brauweiler Gestapo prison, where she was beaten and mistreated. In May 1943, she was released from prison without being told a reason, and fled to southern Germany with her mother. She worked on a farm there until the end of the war and then returned to Cologne. Gertrud Koch told her story in public for the first time in the year 2000 and received the Federal Cross of Merit in 2011.