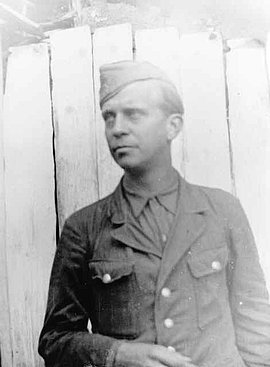 Falk Harnack was born in Stuttgart in 1913. He was the younger brother of Arvid Harnack, who was murdered by the National Socialists in 1942 as one of the leading figures in the Red Orchestra resistance organization. From 1933 to 1937 he studied in Berlin and Munich, where he gained his doctorate, going on to work as a director, actor and dramatic advisor at the Deutsches Nationaltheater in Weimar. Called up for military service in 1941, he had close contacts with the White Rose resistance group. He met up with Hans Scholl and Alexander Schmorell several times during the winter of 1942/43. On the last occasion on February 8, 1943, Willi Graf and Kurt Huber were also present, and they discussed extending the group’s resistance activities. He was arrested on March 6, 1943 and put before the People’s Court in Munich along with Graf, Huber, Schmorell and others on April 19, 1943. Harnack was the only defendant to be acquitted, due to “unique circumstances” – his brother and sister-in-law had just been sentenced to death and executed. Subsequently sent to Greece with the Wehrmacht, Falk Harnack deserted in winter 1943 to avoid imminent arrest by the Gestapo. He joined the Greek partisan movement ELAS, where he set up the Antifascist Committee “Free Germany.” Harnack survived the war in Greece.