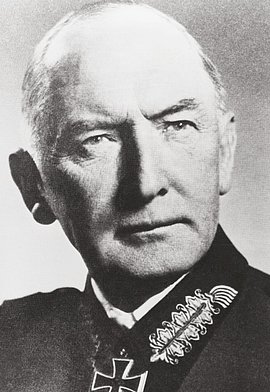 A career officer, Erwin von Witzleben was among those allowed to remain in service in the Reichswehr after the First World War. He was married to Else Kleeberg, with whom he had a daughter and a son. Commander of military district III (Berlin) from 1934 on, Witzleben advocated the violent overthrow of Hitler as early as 1938. From this time on, he remained in close contact with Ludwig Beck, Hans Oster, Paul von Hase, and Carl Goerdeler. In 1939 and 1940, Witzleben served in the Polish and French campaigns. Hitler promoted him to field marshal on July 19, 1940. He appointed Witzleben commander in chief of Army Group D in France that same year and Commander in Chief West in 1941. In 1942, he was replaced and transferred to the "Führer's reserve." From that time on, he maintained close contacts with the resistance organizations in Berlin and also with Henning von Tresckow in Army Group Center. After the attempt on Hitler's life on July 20, 1944, Witzleben assumed command of the armed forces. He was arrested immediately after the failure of the coup on July 21, 1944. On August 8, 1944, he was sentenced to death by the People's Court and murdered several hours later in Berlin-Plötzensee.