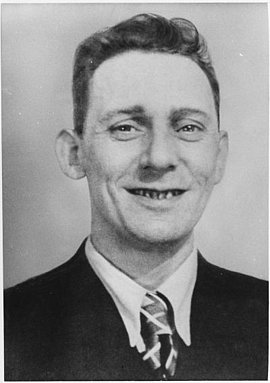 Anton Saefkow, born in Berlin in 1903, trained as a mechanical engineer. He joined the socialist youth movement, joining the metal workers’ association in 1920 and soon becoming one of the leading functionaries in the Communist Youth Federation in Berlin. He joined the KPD in 1924 and was a member of its district leaderships in Saxony, the Ruhr region, and Hamburg from 1928 to 1933. He was first arrested in April 1933 and sentenced to two years in a penitentiary in 1934. In the fall of 1941, Saefkow came into contact with the circle around Robert Uhrig. Along with Franz Jacob, he set up a new network of various illegal groups in 1943. Saefkow and his friends thought it should be possible to combat the Nazi regime by active means. Using sabotage, they planned to impair arms production. Connections to foreign workers were to provide the prerequisites for individual aid and help form a broader basis for the fight against the Nazi regime. The group trained “cadre” and formed workplace groups, as well as informing the public with leaflets. Saefkow’s organization referred to itself, among other names, as the Berlin branch of the National Committee “Free Germany,” the regime opponents in Soviet prisoner of war camps calling for the Germans to fight National Socialism. Anton Saefkow was arrested on July 4, 1944 and sentenced to death along with Bernhard Bästlein and Franz Jacob on September 5, 1944. All three of them were murdered in Brandenburg-Görden on September 18, 1944.