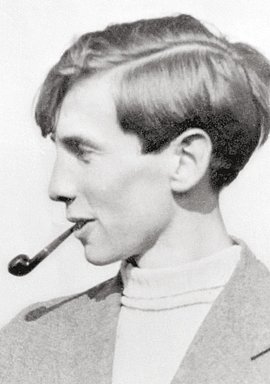 Born in Orenburg/Russia in 1917, Alexander Schmorell came from a German-Russian family that moved to Munich in 1921. He grew up with strong ties to his Russian origins, speaking Russian at home. Schmorell joined the SA directly after the National Socialists took power in 1933, becoming a member of the Hitler Youth in 1934. However, he radically rejected being intellectually co-opted by National Socialism during his labor service in 1937. Following his military service he began studying medicine in Hamburg in 1939, transferring to Munich in the winter semester of 1939. In June 1941 he met Hans Scholl in the 2nd Student Company of the Army Medical Squadron, where they were both quartered from April 1941 on. One year later, Willi Graf also continued his medical degree in the same company. Hans Scholl and Alexander Schmorell wrote the first four White Rose leaflets before being sent to the eastern front along with Willi Graf for a "front internship" at the end of July 1942. Russia and its people had a profound effect on Alexander Schmorell. Under the impression of the criminal conduct of the war, he felt great solidarity with the Russian population. After their return, Schmorell, Scholl, and Graf sought contact to other resistance groups. Schmorell also took part in producing the fifth and sixth White Rose leaflets. In February 1943, Alexander Schmorell, Hans Scholl, and Willi Graf painted freedom slogans on walls around Munich. After the arrest of Hans and Sophie Scholl on February 18, 1943, Schmorell attempted to escape. He was arrested immediately on his return to Munich on February 24, 1943, sentenced to death by the People’s Court on April 19, 1943, and murdered in Munich-Stadelheim Prison on July 13, 1943.