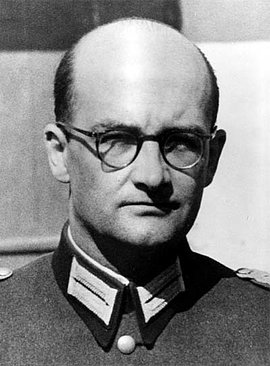 Mertz began his training as a career military officer in 1923. Ever since he had first met Claus Schenk Graf von Stauffenberg in a training course at the War Academy in Berlin, the two had been close friends. After serving in Poland and France, Mertz was assigned to the Führer's headquarters at Vinnitsa on the eastern front, where he worked with Stauffenberg until Stauffenberg was transferred to Africa. Mertz experienced the defeat at Stalingrad during the winter of 1942-43 while serving on the eastern front. In 1944 he married his second wife, Hilde Baier. In June of 1944, Mertz succeeded Stauffenberg as General Friedrich Olbricht's chief of staff. By this time, he was a member of the inner circle around Stauffenberg and was intensively involved in preparations for Operation "Valkyrie," the secret plans for the coup attempt. Mertz strived until the end to make the military coup a success; late in the evening of July 20, 1944, he and Stauffenberg, Olbricht, and Werner von Haeften were executed by a firing squad in the inner courtyard of the Bendler Block, the focal point of the conspiracy.