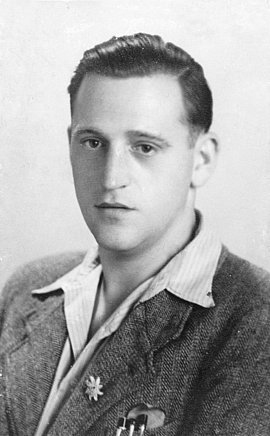 Wolfgang Schieweg and his brother Rudolf grew up in a working-class family in Leipzig-Lindenau, a borough in the west of Leipzig. Their mother Agnes and father Hermann were Social Democrats. Prior to 1933, Wolfgang Schieweg was a member of the Red Falcons, an SPD youth organization, and in a workers’ sports club. After school he trained as a metalworker and joined the “Reeperbahn” Meute, becoming one of the gang’s leading figures. His friends called him “Wolfer.” The core of the Meute often met at the Schieweg family home to listen to banned jazz records or forbidden German-language broadcasts on foreign radio stations. In the spring of 1939, Wolfgang Schieweg was involved in an organized incident on bicycles, in which a Hitler Youth home was damaged by thrown stones and windows were broken. Early in 1939, he and other gang members distributed flyers against the Hitler Youth. Wolfgang Schieweg was arrested on June 6, 1939, and sentenced to three years and three months in a penal institution on November 21, 1939, by the higher regional court in Dresden for “preparation for high treason.” He was sent to Waldheim penal institution and then transferred to Buchenwald concentration camp at the end of October 1942. In April 1945 he was able to leave the Buchenwald sub-camp Schönebeck and return to Leipzig.