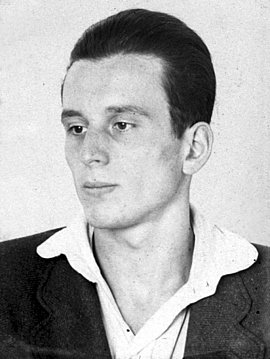 Wolfgang Pander came from a family with a left-wing orientation. His parents were divorced a few years after he was born and he lived alternately with his mother and his father, at times in children’s homes. He attended over twenty schools in total, including the Rütli School in Berlin-Neukölln. Before 1933, Wolfgang Pander was a member of the Communist Youth Federation of Germany (KJVD). He took part in Marxist instruction courses with his father even as a high-school student. As Wolfgang Pander and his family were of Jewish origin, he had to leave school a year before his examinations after the National Socialists took power. He began an apprenticeship as a car mechanic but was excluded from the professional organization due to the Nuremberg Race Laws, and thus could not complete his training. After that he worked as a mechanic’s mate, builder, and coal worker. During an attempt to cross the border to Czechoslovakia illegally in 1937, he was arrested and imprisoned in Sonnenburg concentration camp until August 1939. Via Dagmar Petersen, he met Hanno Günther in September 1940 and joined his resistance group. He was involved in writing flyers, listened to Radio London with Dagmar Petersen, and provided statistics on German war losses to the group. Wolfgang Pander was arrested on August 6, 1941, sentenced to death for “preparation for high treason” on October 9, 1942, and murdered in Berlin-Plötzensee on December 3, 1942.