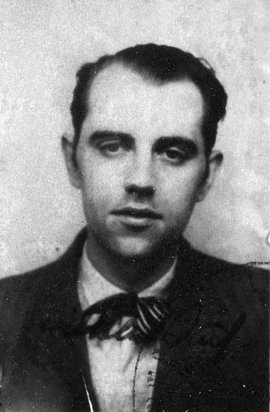 Wilhelm Ruf was born in Hanover in 1909. His father was a metalworker and he had four brothers and sisters. He became a carpenter and was an active member of the SPD in 1930 and 1931, before joining the Revolutionary Labor Union Opposition (RGO) and transferring his allegiance to the KPD. In 1933 he wet into illegal hiding and took part in the struggle against the Nazi regime. He was sentenced to 18 months’ imprisonment for producing leaflets, but was not released until 1939. In 1940 the Hanover Special Court found him guilty of violating the “Heimtückegesetz” (Malicious Practices Act). Sentenced again shortly later for an alleged “economic crime,” Ruf was sent to the Heuberg army training camp in May 1943 as a “soldier on probation.” From there, he was transported to Greece and the eastern front in November 1943. After a stay in a military hospital in Baumholder in the Palatinate region, he and other “999ers” were taken to Buchenwald concentration camp at the end of 1944. Wilhelm Ruf returned to his family in the south of Lower Saxony after the camp was evacuated, and survived the war.