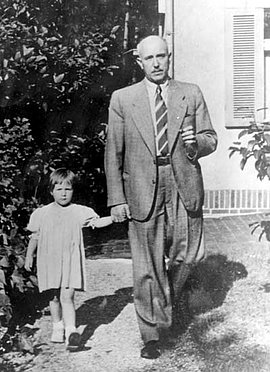 Wilhelm Leuschner (shown here with his granddaughter about 1940) joined the Social Democratic Party (SPD) while still a teenager and assumed executive responsibilities in the labor union movement. As Hessian minister of the interior from 1928 to 1933, he succeeded in neutralizing the National Socialists. Because of this, he was attacked after Hitler's rise to power and arrested on May 2, 1933, after the labor union movement was crushed. He was sent to the Lichtenberg concentration camp for two years for refusing to support international recognition of the Deutsche Arbeitsfront (German Labor Front). After his release, Leuschner ran a small business and established contacts with former political friends and the resistance circles around Beck and Goerdeler while traveling on business. He was to assume the office of vice chancellor in the event the assassination attempt of July 20, 1944 should succeed. Leuschner surrendered to the Gestapo, who had already arrested his wife, on August 16, 1944. On September 9, 1944, he was sentenced to death and murdered the same day at the execution site in Berlin-Plötzensee.