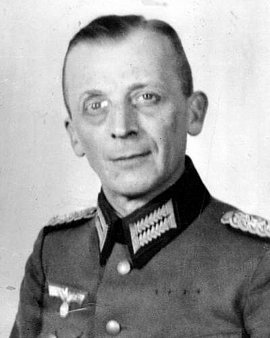 Wilhelm Dieckmann was a senior civil servant with the Reich Archive employed in the army's Military History Research Institute in Potsdam. The ongoing confrontation with the Confessional Church and his understanding of Germany's military traditions led him to reject the National Socialists. He was married to Erika Freiin Mertz von Quirnheim, with whom he had three daughters and a son. His brother-in-law Albrecht Ritter Mertz von Quirnheim informed him of preparations for a planned attempt on Hitler's life in the summer of 1944. Because of this knowledge, the Gestapo arrested Wilhelm Dieckmann as an accessory to the crime on July 25, 1944, after the failure of the assassination attempt. A few days later, his wife and oldest daughter were taken into custody and held hostage. Wilhelm Dieckmann died in pretrial confinement in Berlin's Lehrter Straße Prison on September 13, 1944; the exact circumstances of his death remain unclear. His wife learned of her husband's alleged suicide only several days later. She and her daughter were released from custody shortly thereafter.