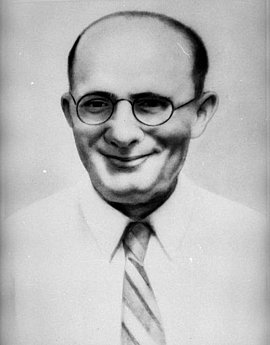 Wilhelm Beuttel was a tailor, who was born in Durlach near Karlsruhe in 1900 and grew up in a working-class family in Friedberg (Hesse). He joined the USPD at the age of seventeen, transferring to the KPD with the left wing of the party in 1920. He was elected as a communist city councilor in Friedberg in 1922. Beuttel attended a communist training course in Moscow in 1929, returning to Friedberg in 1931. He became the Frankfurt KPD’s organizational head in 1932 and was elected to the Hesse state parliament. In summer 1933, Beuttel fled from the Nazis to Paris, where he headed the communist aid organization Rote Hilfe (Red Aid), which supported victims of the Nazi regime. Arriving in Amsterdam in 1936, Beuttel went underground before German troops occupied the Netherlands in 1940. He returned to Germany in the late summer of 1942 to support the resistance actively. He worked alongside Wilhelm Knöchel, becoming his confidant. Wilhelm Beuttel was arrested in early February 1943, sentenced to death, and murdered in Cologne on July 27, 1944.