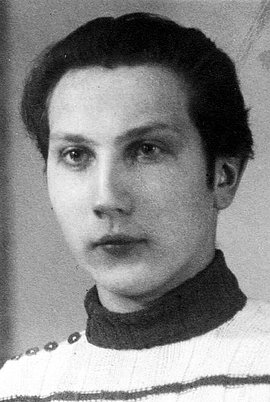 Werner Teumer grew up as an illegitimate child in a working-class Leipzig family. His mother performed manual labor in a printing press. He started school in 1934 and on the pogrom night of 1938 witnessed a neighboring Jewish woman being badly beaten. In 1939 he joined the Jungvolk but not the “Hitler Youth” (“HJ”). After completing his schooling, he began an apprenticeship as a precision mechanic in 1942. At that time, Werner Teumer was part of a circle of young apprentices who met regularly in the center of Leipzig. They went to bars, talked about the political situation, and had one main common goal: They did not want to be drafted into the Wehrmacht. On excursions to the countryside around Leipzig, they came into conflicts with the “HJ”. Over the course of 1943 the group decided to produce flyers, hoping to stir up Leipzig’s young generation. One of their slogans was “Our life belongs only to freedom.” Werner Teumer wrote the text secretly on the typewriter in his apprentice-master’s office. The Gestapo arrested Werner Teumer on November 6, 1943. He had previously shown a flyer to an acquaintance from the “HJ” whom he considered trustworthy, but who then denounced him. The higher regional court in Dresden sentenced him to 18 months’ imprisonment for “subverting the war effort” on September 15, 1944. Werner Teumer had to spend his term in various prisons. The last of them was Hoheneck youth prison, where he was released on May 8, 1945. He returned to Leipzig.