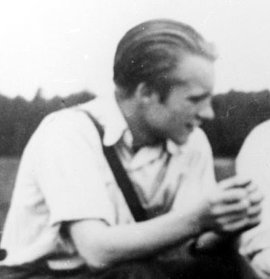 Werner Steinbrink, born in 1917, grew up in a working-class family in Berlin and trained as a laboratory assistant. Steinbrink joined the Communist Youth Federation after 1933, editing an underground newspaper for the KPD district Berlin Southeast, of which Herbert Baum was also a member. He was arrested in 1936, but acquitted due to lack of evidence. Steinbrink was called up to the Reich Labor Service in 1937, drafted to the Wehrmacht in 1939 and detached to the Kaiser Wilhelm Institute as a chemical technician shortly afterwards. He joined the resistance group around Herbert Baum in 1940. Steinbrink attempted to get hold of the necessary financial means for producing leaflets through theft. In mid-May 1942, he also made the detonating material for the arson attack on the anti-Soviet propaganda exhibition “The Soviet Paradise” in Berlin’s Lustgarten on May 18, 1942. He was arrested a few days later, sentenced to death on July 16, 1942, and murdered in Berlin-Plötzensee on August 18, 1942.