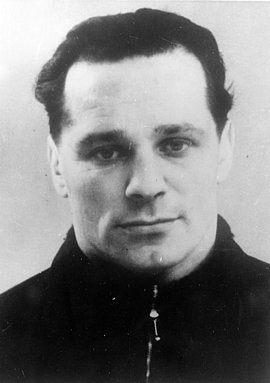 The transport worker Werner Seelenbinder was a successful member of the workers' sporting movement. He was the only German athlete to win in his discipline at the 1928 Spartakiad in Moscow. On his return from the Soviet Union, he joined the KPD. After the National Socialists took power, Seelenbinder joined the East Berlin Sports Association. He used international competitions for his illegal work. In 1933, he won the first in a total of six titles as German champion in light heavyweight wrestling and qualified for the Berlin Olympic Games in 1936, where he came fourth. In 1939, Seelenbinder was drafted into work in the Berlin-Marienfelde armaments company. He managed to organize an illegal resistance group in his workplace, which was also in contact with the resistance groups formed around Robert Uhrig and Alfred Kowalke. Werner Seelenbinder was arrested on February 4, 1942. After more than two years imprisoned in various concentration camps and penal institutions, he was sentenced to death by the "People's Court" in Potsdam on September 5, 1944, and murdered in Brandenburg-Görden penal institution on October 24, 1944.