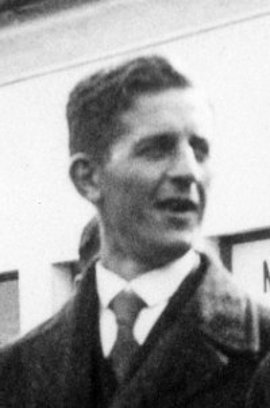 Udo Smidt was born in Ostfriesland (East Frisia) as the son of a Reform Church pastor. He studied theology and worked as a pastor between 1925 and 1930 in the Protestant Reform parish of Rysum. In 1930 he was appointed head of the School Pupils’ Bible Circles. In 1933 he turned the traditional Whitsun meeting of around 5,000 members of the Bible Circles into a deliberate demonstration of strength against the Hitler Youth. In 1934 he advocated the self-dissolution of the youth association. To maintain the cohesion of the School Pupils’ Bible Circles, Smidt published the magazine Jungenwacht (“Young Men’s Watch”) until 1938. His letter of dissolution was known as the “Grey Letter”. Smidt wrote, “The Youth Association lets you go free and discharges you from the forms of a structured young men’s group. But none of you should let go of the King under whose auspices and commandment we set up our bond... in your hearts you should keep on bearing the Sword of the Cross and should be conscious that you have to fight the secret fight for truth and purity at school and at home in the family.” After the dissolution of the Bible Circles, Smidt resumed work as a parish pastor and concentrated on the Confessional Parish of his regional Church, which was working towards affiliation with the Confessional Church. Smidt survived the war.