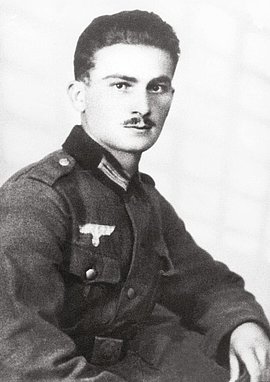 Stefan Hampel was born in Vilnius in November 1918. After finishing his schooling, he completed labor service in 1934 and was a student at the Higher Institute of Politics in Berlin for a brief period in 1938. He was taken into remand custody in East Prussia in the 1939 semester vacation as a result of critical remarks about the German invasion of Poland, and held for almost a year until he was called up to the Wehrmacht in the fall of 1940. In May 1942, Hampel wanted to visit his mother in Grodno (Hrodna), but found that she had been deported along with her relatives and her property had been confiscated, on the orders of the Soviet administration. Shortly afterwards, he witnessed mass shootings of Jews by an SS Einsatzgruppe (mobile killing squad), moving him to desert from the army. Hampel burned his uniform in Grodno and joined a Polish resistance group in Lithuania. He was the only German in the group, helping victims of persecution. The organization saved the lives of several inhabitants of Jewish ghettos and escaped Soviet prisoners of war. After almost a year of living underground, Hampel left Lithuania to inform the International Red Cross in Switzerland of the crimes against the Jewish population in the East on behalf of the resistance group. However, he was arrested in Freiburg. He initially attempted to conceal his true identity, claiming to be a Lithuanian worker. Hampel was held in the Wehrmacht remand prison in Berlin from July 1943, and was sentenced to death for desertion on August 11, 1943. A plea for clemency was unexpectedly granted in August 1943. Stefan Hampel managed to survive the rest of the war by pure chance, after several months in moor camps in Emsland and a punishment battalion.