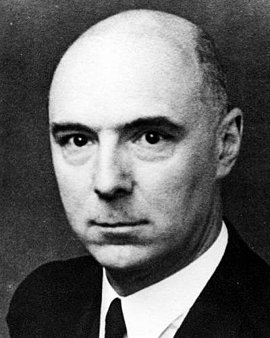 The law scholar Rüdiger Schleicher gained his doctorate in 1923 with a thesis on aviation law, and continued working in this field as an official in the Reich Transport Ministry and later in the Reich Aviation Ministry. From 1939 on he was also director of the Institute of Aviation Law at Friedrich-Wilhelm University in Berlin. He was married to Ursula Bonhoeffer, with whom he had three daughters and a son. He had close links to the circle of opponents of the National Socialist regime around Hans von Dohnanyi and Dietrich Bonhoeffer in the Office for Foreign Affairs/Counterintelligence. Rüdiger Schleicher was arrested on October 4, 1944 because the Gestapo had found files in the Armed Forces High Command in Zossen proving that counterintelligence members were involved in the conspirators’ plans for the coup of July 20, 1944. Schleicher was sentenced to death by the People’s Court on February 2, 1945. After the judgment he remained in custody in Lehrter Straße Prison in Berlin. On the night of April 22-23, 1945 a special detachment from the Reich Security Main Office shot Rüdiger Schleicher and other prisoners on derelict grounds next to the prison.