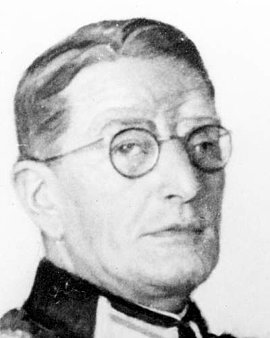 Rudolf Graf von Marogna-Redwitz completed his training as a career officer and worked initially in a successor organization to military counterintelligence after the First World War. He was married to Anna Gräfin von Arco-Zinneberg, which whom he had a daughter and two sons. In 1935 he was transferred to the Armed Forces under Wilhelm Canaris and went to Vienna in 1938 as chief of the counterintelligence office. He used his position to support persecuted opponents of National Socialism. After Admiral Canaris was removed from office, in the spring of 1944 Friedrich Olbricht requested Marogna-Redwitz’s transfer for assignments in the Army High Command in Berlin. Marogna-Redwitz offered his services to the conspirators as liaison officer for military district XVII (Vienna). On July 20, 1944 in Vienna, he succeeded in establishing contact with the political commissioners Karl Seitz and Josef Reither, but was arrested shortly afterwards by the Gestapo. He was sentenced to death by the People’s Court on October 12, 1944 and murdered the same day in Berlin-Plötzensee.