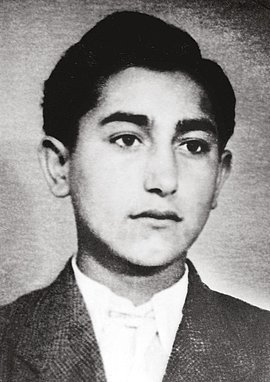 Otto Rosenberg, born in Draugupönen, East Prussia, grew up with his grandmother in Berlin. At the age of nine in 1936, he was sent to the Berlin-Marzahn assembly camp along with his family. There, he was subjected to the pseudoscientific examinations of the “Racial Hygiene Research Unit,” set up in 1936 to register all German Sinti and Roma. He was deployed as a forced laborer in a Berlin armaments factory as of 1940. Accused of sabotage, Otto Rosenberg was soon arrested and imprisoned for four months. In April of 1943, he was deported to Auschwitz-Birkenau extermination camp, where he was among those who prepared an uprising against the SS in the “gypsy camp” on May 16, 1944. In August of 1944, Otto Rosenberg was sent to Buchenwald concentration camp, and later as a forced laborer to the underground tunnels of Dora-Mittelbau concentration camp and of the Ellrich sub-camp. He was liberated from Bergen-Belsen concentration camp in April of 1945. Many of his relatives had been murdered by the National Socialists.