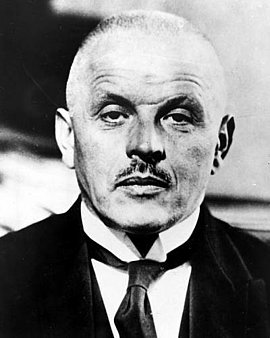 Otto Geßler was one of the founding members of the German Democratic Party in 1919 and initially supported liberal ideas. In March 1920 he succeeded Gustav Noske as Reich Minister of Defense and held this post in different cabinets until 1928. He emphasized the government’s claim to political authority vis-à-vis the Reich Army, but could not always enforce this. After 1933 Otto Geßler lived in retirement. Although he did not actively support the resistance against the National Socialists, many of Hitler’s opponents regarded him as a reliable authority. The conspirators around Ludwig Beck and Carl Goerdeler designated him as political commissioner in military district VII (Munich) in the event of a successful coup. After the unsuccessful assassination attempt on Hitler of July 20, 1944, Otto Geßler was arrested by the Gestapo and imprisoned without trial in various concentration camps and prisons until February 24, 1945. After the Second World War until his death he devoted himself mainly to the reconstruction of the Bavarian and German Red Cross.