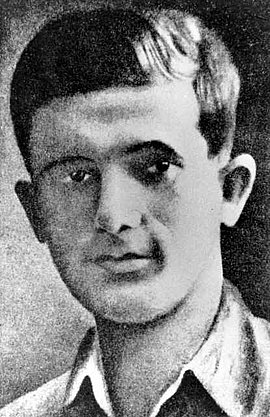 Mordechai Anielewicz, born in Warsaw in 1919, grew up in a working-class Jewish family and joined Zionist groups before the outbreak of World War II. After Warsaw was occupied by German troops, he fled east, hoping to escape to Palestine. Picked up on the border to Romania, Mordechai Anielewicz ended up in Vilnius, a popular meeting point for Eastern European Jews at the time. He joined another left-wing Zionist youth group and returned to Warsaw to build up an underground organization and publish the magazine Against the Stream (Negeot Hazerem). When he heard about the crimes committed against Polish Jews, he set up the militant underground organization ŻOB (Żydowska Organizacja Bojowa), with the aim of actively fighting the German occupiers. From that time on, he was a commander – his leading role in the active underground struggle has never been questioned. On January 18, 1943, his group fought its first battle with German soldiers. It then started preparing for an armed uprising in the Warsaw Ghetto, which began on April 18. Mordechai Anielewicz was one of the leaders of the uprising. He died along with many others, defending a basement in Mila Street on May 8, 1943. His goal was to show the world that Jews could counter the German oppressors in open battle and play their part in the military conflict with Germany.