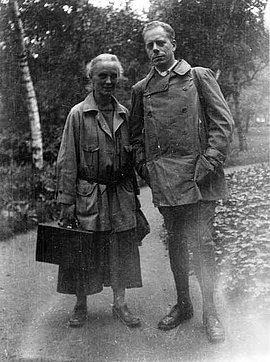 The educationalist Minna Specht was a close colleague of Leonard Nelson (photo), who had created an International Youth League in 1917-18 as a new educational community based on principles of Lebensreform (a movement advocating a new way of life). When the league was expelled from the SPD because of political differences, the Internationaler Sozialistischer Kampfbund (ISK - International Socialist Combat League) was set up. Minna Specht ran the ISK’s boarding school Walkemühle near Kassel, emigrating to Denmark with a number of her students after the National Socialists took power. Thanks to Mary Saran’s contacts there, the school reopened in Denmark, creating an important link between the ISK groups in Germany and the leadership in exile. In November 1938 the boarding school moved to Wales. Minna Specht was put into an internment camp in 1940. In 1943 she was a member of the program commission of the Union of German Socialist Organizations in Great Britain. Minna Specht returned to Germany after the war.