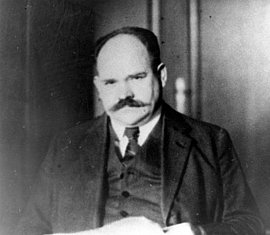 Born in Suhl in 1890, Max Urich was the Chairman of the German Metal Workers’ Association (Deutscher Metallarbeiterverband – DMV) in Berlin. He was arrested and imprisoned on May 2, 1933. After his release, he joined the illegal leadership of the Berlin SPD as a representative of the trade unions. Arrested again in March 1935, Urich was imprisoned in Sachsenhausen and Buchenwald concentration camps up to 1939 – despite being acquitted by the Prussian High Court in Berlin on February 4, 1936. On his release, he made contact with other former trade unionists, including Wilhelm Leuschner, with whom he built up a loose network of connections across Germany. Following the attempted coup of July 20, 1944, Urich was arrested again, but managed to escape on the way to Flossenbürg concentration camp in 1945. Max Urich survived the end of the war.