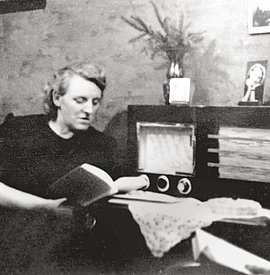 Martha Gurklies was born in Tilsit in 1897. She worked in an office and married Willi Seeger in 1923. In 1930 she joined the Proletarian Freethinkers’ Association. Her husband was arrested as a Communist in September 1933 and sentenced to almost two and a half years in prison for “preparation for high treason.” Later, the couple were members of the Red Orchestra resistance circle in the Berlin district of Neukölln. In 1942/43 they regularly listened to Radio Moscow, on several occasions in the presence of a Soviet forced laborer. Willi Seeger was drafted into the Wehrmacht in 1943 and went over to the Red Army three weeks later. Martha Seeger was sentenced to two years in a penitentiary for listening to foreign radio as late as March 7, 1945.