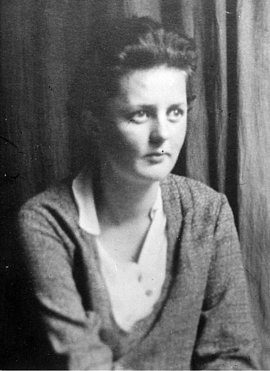 Margarete von Trotha was the daughter of the mayor of Wilhelmshaven, Emil Bartelt, and his wife Dorothea. Despite starting a hunger strike to persuade her father that university entrance-level examinations were not “too difficult for girls,” she had to end her schooling three years early. She trained as a youth worker in the social pedagogy seminar run by the Youth Home association. While employed by Friedrich Siegmund-Schultze, a professor of youth welfare and social ethics at Berlin University, she analyzed workers’ relations to the church. She went on to complete her school education at the Cäcilien School in Oldenburg, then gained a PhD in economics. At university in Frankfurt am Main she met Carl-Dietrich von Trotha, whom she married in 1933. The couple had four sons. Unlike other Kreisau Circle wives, Margarete von Trotha not only took part in all three conferences from 1938 on and other meetings, but was also actively involved in discussions and worked on the content of the Kreisau memoranda. Together with her husband Carl Dietrich von Trotha and their friend Horst von Einsiedel, she developed the Kreisau Circle’s economic policy concepts. Many meetings of the working group on economic issues were held at the Trothas’ home in Berlin-Lichterfelde. Unlike many of their fellows activists, Margarete and Carl Dietrich von Trotha were not arrested in 1944 and survived the end of the Nazi regime in freedom.