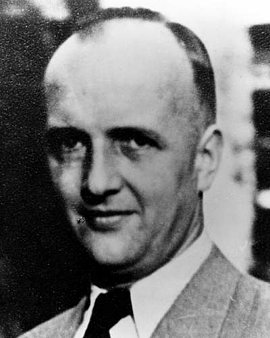 Ludwig Gehre initially worked as a managing director in the building industry. After the beginning of the Second World War he was drafted to the Office for Foreign Affairs/Counterintelligence under Admiral Wilhelm Canaris in the Armed Forces High Command. A member of the circle around Hans Oster and Hans von Dohnanyi, Gehre was involved in preparing an assassination attempt on Hitler undertaken in March 1943 by the military opposition sympathizers around Henning von Tresckow. When Helmuth James Graf von Moltke was arrested in January 1944 because of his contact with the envoy Otto Kiep, the same fate befell Captain Ludwig Gehre. But shortly afterwards, he managed to escape from his guards during a transport. After the unsuccessful assassination attempt on Hitler on July 20, 1944, the hunt for Gehre was resumed. He was able to remain in hiding until November 8, 1944. Before his arrest Ludwig Gehre shot his second wife and then tried to kill himself, inflicting serious injury on his eye. After he recovered he was committed to Flossenbürg concentration camp and murdered there on April 9, 1945 after an SS court martial.