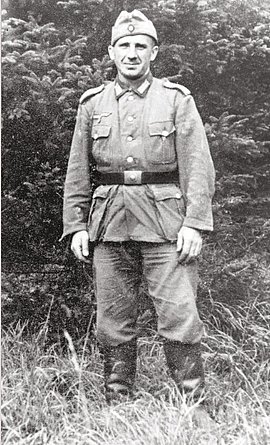 Ludwig Gehm was active in socialist groups in his youth and joined the SPD in the early 1920s. He was a member of the International Socialist Combat League (ISK) from 1927. In Frankfurt am Main, he was part of a resistance circle under the guise of a vegetarian restaurant. The group disrupted Nazi rallies, committed sabotage, and saved political refugees. He was arrested on several occasions and sentenced to a penal institution in 1938. After serving his prison term, Ludwig Gehm was transferred to Buchenwald concentration camp and sent from there to one of the 999th Division’s “probation units” in 1943. A year later, posted to Greece, he deserted to the Greek national liberation movement ELAS. Within this organization, he tried to persuade Wehrmacht soldiers to give up fighting, using flyers and other methods. Ludwig Gehm survived the war in a British prisoner-of-war camp and began working for the SPD again after his return to Germany, as a longstanding city council member in Frankfurt am Main.