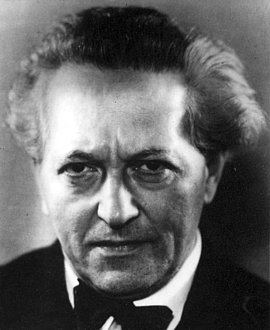 Born in Berent/West Prussia in 1885, Kurt Singer started his career as a neurologist, only following his artistic leanings later in life. He became a widely respected critic, conductor, and director. In 1933 he and several friends set up the Kulturbund deutscher Juden (Cultural Association of German Jews) in Berlin, to provide employment for Jewish artists persecuted and fired from their previous work, and give Jewish people access to culture. Singer became head of the Reich Association of Jewish Cultural Associations in Germany in 1935, making him a thorn in the side of the Nazi “Reich Cultural Administrator” Hans Hinkel, who had the job of overseeing all German Jews. In November 1938 Singer returned to Europe from the USA on receiving news of the November pogrom. Friends in Holland prevented him from going back to Germany. Kurt Singer was kept prisoner in the Netherlands from 1940 until his deportation to Theresienstadt concentration camp, where he died in February 1944.