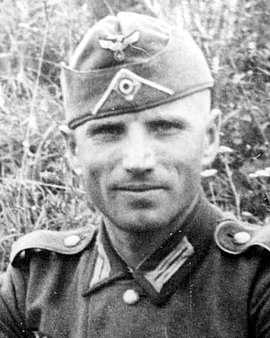 After learning the trade of wood carver, Kurt Schumacher studied at Berliner Vereinigte Staatsschule, a college for liberal and applied art, where he met Elisabeth Hohenemser. They married in 1934. Schumacher, who was completing his master class studies, had contact to Harro Schulze-Boysen and the journal “gegner” (“opponent”). The medallions that can still be seen today on the Schleusenbrücke, a bridge in Berlin, were among his first commissions as a freelance sculptor. Political discussions in Schulze-Boysen’s circle of friends strengthened the growing cohesion of the resistance network. Contacts to Heinrich Scheel, Eugen Neutert and Hans Coppi enlarged the circle of opposition members. In May 1941 Kurt Schumacher agreed to act as radio operator to maintain communication between the group and the Soviet Union in the event of war. However, he was drafted to the Wehrmacht at the beginning of June 1941. When the parachute agent Albert Hößler arrived from Moscow in early August 1942, Schumacher gave him accommodation in his apartment and introduced him to Hans Coppi. When Schumacher was arrested on September 12, 1942, the Gestapo vandalized his studio, destroying a large number of art works. Kurt Schumacher was sentenced to death by the Reich Court Martial on December 19, 1942 and murdered three days later in Berlin-Plötzensee.