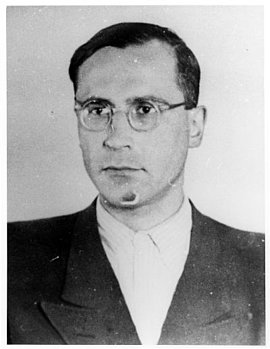 The son of a district attorney in Czarist Russia and born in Oryol in 1910, Konstantin Shadkevitch and his parents fled from the Red Army to Constantinople in 1920. He attended Russian and French schools in Constantinople and from 1921 on in Prague, and studied chemistry and physics at the universities of Leuven and Prague. Shadkevitch became a Czechoslovakian citizen in 1937. He completed his PhD in 1940 and was sent to Germany as a forced laborer shortly afterwards. He worked as a chemist in Berlin and the Lausitz region, setting up resistance groups with other forced laborers. He came into contact with the circle around Georg Groscurth and Robert Havemann in 1943. Konstantin Shadkevitch used his position to make contacts between various groups of forced laborers. He brought together French, Belgians, Czechoslovakians and Ukrainians, passed on messages and tried to obtain forged papers. His link to Groscurth enabled him to coordinate these activities with German regime opponents. Konstantin Shadkevitch was arrested on October 4, 1943, sentenced to death by the People’s Court along with Vladimir Boisselier, Jean Cochon and Nikolai Romanenko on April 27, 1944, and murdered in Brandenburg-Görden on October 30, 1944.