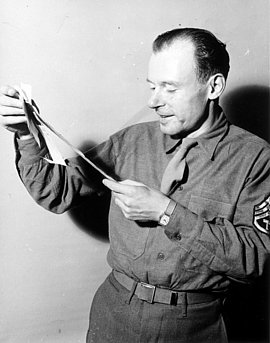 Klaus Mann was the second child of Katja and Thomas Mann, born in 1906. In the Weimar Republic, he started working as a theatre critic and won acclaim as a writer at the early age of twenty. An outspoken critic of National Socialism, Klaus Mann emigrated to Paris in March 1933, directly after the Nazis took power. He edited one of the most important emigration publications, Die Sammlung, from autumn 1933 to summer 1935. His novel Der Vulkan is an impressive description of German life in political exile. In summer 1938, he witnessed the end of the Spanish civil war as a reporter, then left Europe for the USA. He joined the US Army in late 1942 so as to combat the Nazi regime from outside. He landed in Italy with American troops, working in the psychological warfare unit. Klaus Mann committed suicide in the South of France in 1949.