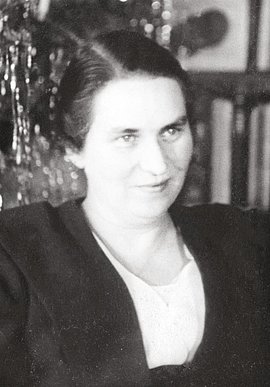 Katharina Staritz, the daughter of a secondary school teacher in Bremen, studied philosophy and theology. In 1932 she was appointed to the supraparochial service in Breslau and did welfare work as a city curate. In 1938 she took charge of the Silesian Confidential Office of the “Church Aid Office for Protestant Non-Aryans” (Pastor Grüber’s Office) and helped victims of discrimination and persecution to move to other places in Germany or to emigrate. When the German Jews were forced to wear the “Jewish Star” in September 1941, Katharina Staritz urged the Breslau pastorates in a circular letter not to ostracize the parish members affected by this discrimination. As a result she was suspended by the Protestant consistory and fiercely attacked in the SS newspaper, “Das Schwarze Korps” (The Black Corps). At the beginning of March 1942 the Gestapo took Katharina Staritz into “Schutzhaft” (“protective custody”) and held her in detention in various prisons until she was deported to Ravensbrück concentration camp in August 1942. After her release in May 1943 she remained under Gestapo supervision and was banned from working in her profession. Katharina Staritz survived the war and worked in the pastoral service in Thuringia and Hesse after 1945.