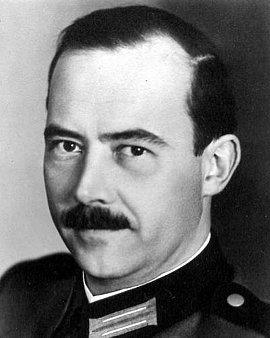 After graduating in history, in 1930 Karl Ludwig Freiherr von und zu Guttenberg set up the Workplace for Conservative Literature, which started producing the publication “White Pages. Journal for history, tradition and state” in 1934. He was married to Therese Prinzessin zu Schwarzenberg, with whom he had two daughters and a son. In time, Guttenberg recruited authors like Reinhold Schneider, Jochen Klepper and Ulrich von Hassell for the “White Pages”. As a result the journal contributed to discussion of traditions of political thought beyond National Socialism. In August 1939 Guttenberg arranged the first contact between Carl Goerdeler and the diplomat Ulrich von Hassell. With Ludwig Beck’s help, Guttenberg, like other opponents of Hitler, was drafted to military service at the Office for Foreign Affairs/Counterintelligence under Admiral Canaris in the Armed Forces High Command. Guttenberg was a member of the circle there around Hans Oster and Hans von Dohnanyi. A few days after the assassination attempt on Hitler of July 20, 1944, Guttenberg was arrested by the Gestapo and severely maltreated during interrogation. On the night of April 23-24, 1945, a special detachment from the Reich Security Main Office murdered him together with two other prisoners in obscure circumstances near the prison in Lehrter Straße in Berlin.