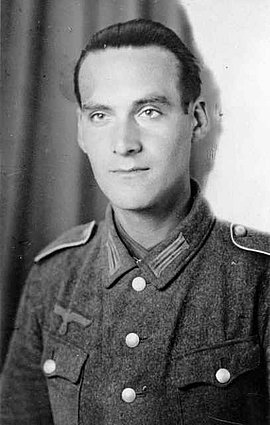 Karl Ibach was born in Elberfeld on April 3, 1915, joining the Kommunistischer Jugendverband (Communist Youth Federation) and the KPD at the age of sixteen. He wanted to be a bookseller. In spring 1933, he was taken to Kemna concentration camp in Wuppertal, and not released until the end of the year. Ibach continued his resistance against the Nazi regime and fled to the Netherlands. He was arrested shortly after his return and soon sentenced to eight years’ penitentiary in Hamm for alleged preparation for high treason. He was held in concentration camps and penitentiaries – including Esterwegen, Börgermoor, and Waldheim – until 1943. On his release, he was forced to join one of the 999th Division’s “probation units”; he was drilled at Heuberg camp to defend the regime he despised on the front. Ibach was taken as a prisoner of war by the Soviets in 1944, and was not released until 1947.