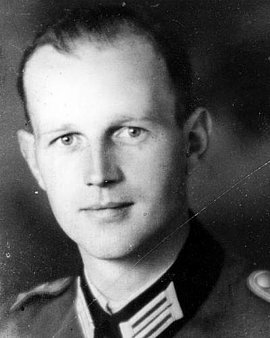 After gaining his school-leaving certificate, Karl Ernst Rahtgens decided on an officer’s career and joined a Potsdam infantry regiment in 1928 as an officer cadet senior grade. He was married to Johanna von Cramon, with whom he had a daughter and two sons. In 1937 Rahtgens passed the entrance examination for the War Academy, and was transferred to general staff training in Berlin in 1938. In the early years of the war he fought on various fronts. In 1942 he was detached as lieutenant colonel on the general staff to the “Führer’s” headquarters, the “Wolf’s Lair”, near Rastenburg in East Prussia. He became friendly there with Günther Smend, with whom he discussed the war situation. These discussions coincided with the views of Rahtgens’ uncle, General Field Marshal Günther von Kluge, who sympathized with the resistance for a while, but eventually wavered. Rahtgens was involved in the preparations for the coup attempt of July 20, 1944. He was arrested by the Gestapo in Belgrade in August 1944. Karl Ernst Rahtgens was sentenced to death by the People’s Court on August 30, 1944 and murdered the same day in Berlin-Plötzensee.