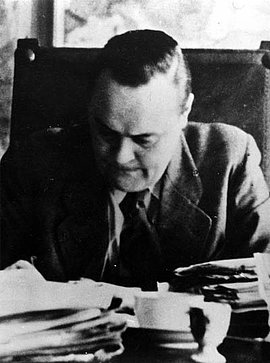 Josef Wirmer opened a law office in Berlin after studying law. He established contacts with politicians of the Weimar coalition parties that governed Prussia until 1932. An active Catholic, Wirmer joined the Center Party early and strengthened the party's uncompromisingly democratic left wing. He was married to Hedwig Preckel, with whom he had two daughters and a son. After Hitler's rise to power, he became an outspoken critic of the leaders of the party's parliamentary faction, who approved the Enabling Act and later even approved a resolution for the Center Party to dissolve itself. As an attorney, Wirmer assisted victims of racial and political persecution. From 1936 on, he worked together with opposition labor leaders such as Jakob Kaiser, Wilhelm Leuschner, and Max Habermann and established contact to former members of the Center Party in Cologne and Düsseldorf. From 1938 on, he was a close confidant of Hans Oster and Hans von Dohnanyi. In 1941-42, he joined the circle around Carl Goerdeler, who planned to make him minister of justice in his post-coup cabinet. After the failure of the assassination attempt of July 20, 1944, Wirmer was arrested on August 4 and held in the Ravensbrück concentration camp. Before the People's Court, he sought an open confrontation with Freisler. Wirmer was sentenced to death on September 8, 1944, and murdered the same day in Berlin-Plötzensee.