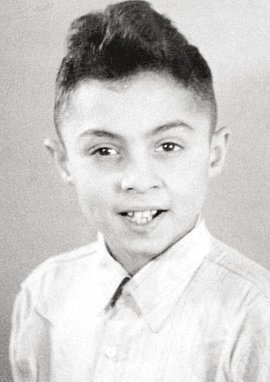 Josef “Muscha” Müller, the son of a Sinti family in Bitterfeld, was placed in an orphanage as a baby. He was given to foster parents in Halle an der Saale at the age of 14 months. In November of 1944, Gestapo officers collected twelve-year-old Josef “Muscha” Müller (shown here in Summer 1943) during class to take him to the hospital for forced sterilization. The operation was performed a week later. Aware of the risk that he would be consigned to a concentration camp afterward, Social Democratic friends of the family secretly picked him up from the hospital. They managed to hide him until his liberation by American troops in April of 1945.