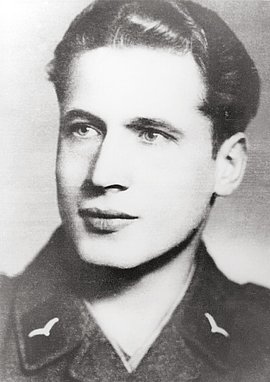 Josef Köhler was born in Linz am Rhein near Sigmaringen. The family moved to Munich in 1930, where Josef Köhler attended school. He went on to train and work as a shoemaker. His father was severely wounded as a soldier in 1939. In 1941, Josef Köhler was also drafted into the Wehrmacht and wounded shortly later. In military hospital he was informed that he had been expelled from the Wehrmacht for “racial reasons” as a Sinto. Josef Köhler and many of his relatives were deported to Auschwitz-Birkenau in March of 1943. After the uprising of May 16, 1944 in the Auschwitz-Birkenau “gypsy camp,” his mother, grandmother and three of his siblings were murdered in the gas chambers. Josef Köhler was sent to Ravensbrück concentration camp at the end of July 1944. When he was consigned from there to Sachsenhausen concentration camp in 1944, he learned that his father had been murdered in the same camp by the SS. Along with many other Sinti and Roma, Josef Köhler had to perform forced labor on the site for brick-making until he managed to escape during an air raid at the end of April 1945. He joined a group of refugees and was liberated by Russian troops.