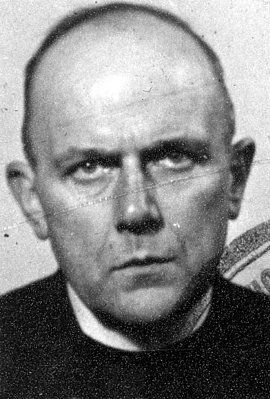 Josef Kayser was the son of a textile factory owner and grew up in Schmallenberg in the Sauerland region. After taking part in World War I, he worked as a miner and studied mining sciences in Clausthal-Zellerfeld and Berlin. During his time in Berlin, he was in contact with the Catholic priest and social reformer Carl Sonnenschein, whose ideas made a deep impression on him. Kayser decided to study theology in 1926 and was ordained as a priest in Paderborn in 1931. After the National Socialists took power, Kayser repeatedly came into conflict with the regime and was interrogated on several occasions. Eventually he volunteered for the Wehrmacht as a military chaplain. Kayser took part in the war against the Soviet Union as a Wehrmacht priest and was taken prisoner near Stalingrad in January 1943. In the summer of 1943, he joined the National Committee “Free Germany” (NKFD), to take a stand as a clergyman against the treatment of the churches in the Reich. He also hoped to limit the communist influence within the organization. In June 1944, he was one of the founders of the Working Group on Church Affairs in the NKFD. His comrades had a great deal of respect for Kayser because he had rescued a number of injured men from the battle lines. Josef Kayser was able to return to Germany in December 1945.