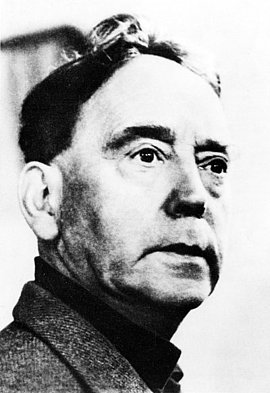 John Heartfield, one of the most famous German émigré artists, increasingly used his works to combat the Nazi Party NSDAP in the public eye from the early 1930s on. Many of his photomontages were used as title pages for the Arbeiter-Illustrierte Zeitung newspaper, and his exhibitions gained him great respect as a politically engaged artist. After Hitler took control of the government, Heartfield narrowly escaped the Nazis by leaving the country in the spring of 1933. He initially fled to Czechoslovakia, and then emigrated to Britain in 1938. Interned briefly in 1940, he carried on his artistic work in London as he had in Prague. John Heartfield returned from exile to the GDR in 1950 and died in East Berlin in 1968.