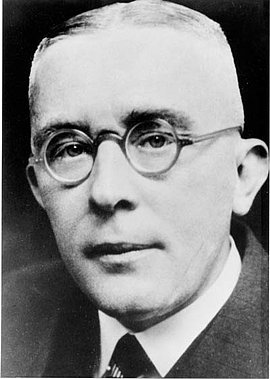 Johannes Popitz, an administrative lawyer, had served in the Reich Ministry of Finance since 1919, where he was appointed state secretary in 1925. He was married to Cornelia Slot, with whom he had a daughter and two sons. Chancellor Franz von Papen appointed him Reich commissar for the Prussian Ministry of Finance after deposing the government of Prussia on July 20, 1932. A year later on April 21, 1933, the National Socialist leaders appointed Popitz as the new Prussian minister of finance. From 1938 on, he worked together with Hans Oster from the Office for Foreign Affairs/Counter Intelligence. He established numerous contacts with military opposition circles. Popitz personified the inherent contradictions in resistance motivated by conservative convictions: He held high government offices but nonetheless drifted into the circle of opposition to the regime. In the end, he supported the coup attempt. He was a member of the Mittwochsgesellschaft. In 1939-40, he drafted an arch-conservative "Provisional Basic Law of the State." In a meeting with Heinrich Himmler, he attempted to ascertain how the SS felt about attempting a coup. Popitz remained a controversial figure in the eyes of many conspirators, although he was designated to become minister of education and cultural affairs in the event the coup should succeed. After the failure of the assassination attempt of July 20, 1944, the Gestapo arrested Popitz despite his contacts with Heinrich Himmler. Johannes Popitz was sentenced to death by the People's Court on October 3, 1944, and murdered five months later in Berlin-Plötzensee.