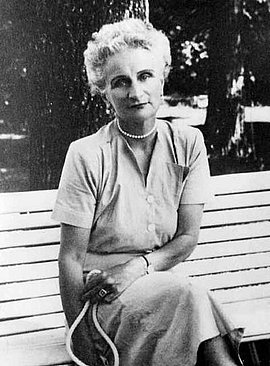 In 1908 Johanna Dotti married Wilhelm-Heinrich Solf, at that time the governor of Samoa. He was subsequently an undersecretary of state in the Foreign Ministry and then German ambassador in Japan from 1920 to 1927. From 1928 on Johanna Solf lived in Berlin; her husband died there in 1936. She and Elisabeth von Thadden regularly hosted tea parties for a group of friends at their homes, so that Johanna Solf’s apartment became a frequent meeting place for Foreign Ministry officials opposed to National Socialism. Johanna Solf tried to help victims of political and racial persecution to flee from Germany. In the spring of 1943 she arranged a discussion between the diplomat Richard Kuenzer and the Catholic cleric Max Josef Metzger, and learned about Metzger’s peace program. Denounced by a Gestapo informer, Johanna Solf was arrested on January 12, 1944 along with other members of her circle, Otto Carl Kiep, Artur Zarden and Elisabeth von Thadden. The National Socialist regime took a hard line against the members of the Solf Circle. Following the death sentences imposed on Elisabeth von Thadden and Otto Carl Kiep in the first trial, the follow-up trial of Johanna Solf and her five co-defendants was scheduled for April 28, 1945; but this never takes place. Johanna Solf was liberated at the end of April 1945 and survived the war. Richard Kuenzer and another member of the Solf Circle, Albrecht Graf von Bernstorff, were murdered near Lehrter Bahnhof on April 24, 1945.